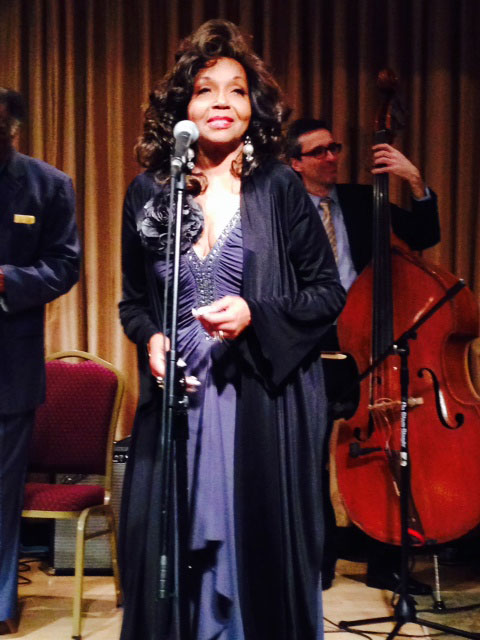 Lynnie Godfrey has been performing live since the age of three. She performed with her Mother (vocalist, Maggie Godfrey) and her family member Jo-Ann Wood in the Pentecostal Churches they attended in Harlem and Brooklyn. Her deep voice then was always a source of interest for such a young child.

At the urging of her Mother she started studying voice…both classical and commercial styles with Dr. Chauncey Northern of Carnegie Hall and as result of her God given talent and learned skill she was on Broadway in the musical revue EUBIE! less than two years after graduating from Hunter College…That lead to nightclub and theatre work from New York to Las Vegas to Amsterdam, Holland, London , England …just to name a few..,

From theatre to clubs to television and film Ms. Godfrey displays a passion to perform. Whether appearing in a movie with Kathleen Turner, (V.I.WARSHAWSKI) starring in a Norman Lear sitcom (704 HAUSER), numerous television guest spots animated series... or live in an August Wilson (GEM OF THE OCEAN) play or the Broadway stage…she has always had the desire to perform in front of audiences …However the live audience of the cabaret/nightclub genre excites Ms. Godfrey and presents that challenge of achieving excellence every night for her audiences.

She has tirelessly pursued a career in directing, music and acting since college…never preferring one over the other…but loving all three. Her pleasure now is being able to convey both the acting and the singing in her cabaret/theatre interpretations of songs on her debut CD…LYNNIE GODFREY…DOING IT HER WAY and her follow up Christmas CD…SPENDING THE HOLIDAYS WITH LYNNIE GODFREY…both expressing her love for the classic songs in their original offerings.

Ms. Godfrey looks forward to bringing her live performances as scheduled in Pennsylvania and hopes to perform live for new audiences in New York, Chicago Los Angeles .the Midwest and South …and a special shout out to the hotspot radio audiences that are currently enjoying her CD….DOING IT HER WAY on radio across the nation…Her next challenge…a national and international tour. 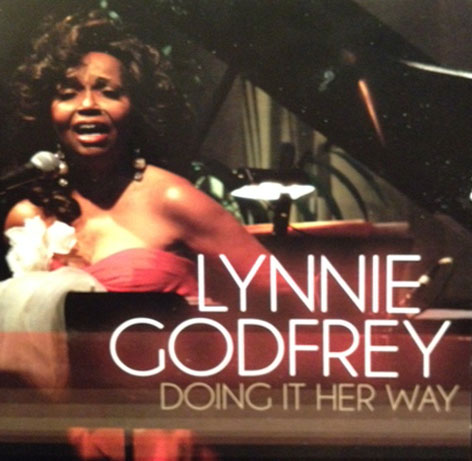 Purchase the album on iTunes

Purchase the album on Broadway Tunes

Click below to listen to Lynnie Godfrey perform "Send In The Clowns", available on her new album.

Lynnie Godfrey is Doing It Her Way with Debut Album, Released in March

George W. Harris offered a glowing review of Lynnie Godfrey: Doing It Her Way. Read below or visit Jazz Weekly at this link: Jazz Weekly

Lynnie Godfrey: Doing It Her Way

Vocalist Lynnie Godfrey delivers a song like a stage production. You can tell she’s comfortable acting, as each of these songs with the mix and match team of Roger Latzgo/p-g, Tom Hamilton/ts, Anthony Marino/b and Gary Rismiller/dr is delivered like a story being told. Her dramatic vibrato inflections on a dramatic intro lead into a swinging and enthusiastic “It Don’t Mean a Thing” while other tunes with the whole band such as “The Best is Yet to Come” and “L-O-V-E” feature her in respective moods of saucy and coy. When she Spartans down the support with simple support by Latzgo and Hamilton, she glows with an evocative “Moon River” or reaches down deep and gets the red clay beneath her fingers on “But Beautiful” as her inflections give descriptions to each adjective. A sole duet with Latzgo on guitar during “Send in the Clowns” makes you want an encore performance, which is what all actresses desire-leave the crowd wanting more impressive tales!

"Miss Godfrey's interpretation of the Great American Songbook is both luxurious and reverent. Her shows never fail to offer the audience a memorable evening."
~ Jeffrey A. Parks President & CQO

"Lynnie Godfrey is, quite simply, the top (even though her range suggests she dips low!). Hard-working, both on her presentation and on driving her loyal fans to her shows, she dazzles an audience as she holds them in the palm of her hand and carries them on an inspiring journey through the American Songbook. I can't wait to be entertained, educated, and enraptured by her again. "
~ Patrick Brogan, Vice President of Programming , ArtsQuest

Lynnie Godfrey is the quintessential performer....a voice like silk that puts her in the league of Sarah Vaughan; charisma and charm to create an intimate audience connection; exquisite delivery of lyrics and a presentation that will knock your socks off!
~Ethel Drayton-Craig, Allentown Symphony Association Jazz Cabaret, Chairman

Lynnie Godfrey received a DRAMA DESK Nomination for her Broadway debut in the Musical Revue “EUBIE!”… She received the DRAMALOGUE and NAACP Awards for Outstanding Performance by a Supporting Actress for her portrayal in “NO PLACE TO BE SOMEBODY”. She received the AUDELCO Award for Outstanding performance for her work in “SHUFFLE ALONG”. For Directing Ms. Godfrey received the TYRONE GUTHRIE Award. She has received he NAACP Award for Best Producer also the AUDIO EARPHONE Award and the BENJAMIN FRANKLIN Award for her recording of the the title role “SNOW QUEEN ” among others…

"Lynnie Godfrey is Ella, Lena, Billie, Sarah and other great singers wrapped up into one.
Superb vocal styling that has the power to move you to the very center of your soul."
~ Don Arrington, Producer/Writer

"Lynnie Godfrey is firmly in the cabaret tradition of the great Bobby Short, a consummate dramatic story teller in song.
A superb entertainer who makes us feel the songs."
~ G. Bruce Boyer, Town and Country

New York, NY - Lynnie Godfrey is Doing It Her Way with the March release of her debut album. The 15-track album was produced by Lynnie and Kent Heckman and was recorded at Red Rock Recording Studio in Pennsylvania. Of Lynnie's debut, G. Bruce Boyer of Town and Country said it best, "She specializes in the Great American Songbook of Gerswhin and Porter, Berlin and Lorenz Hart, but is comfortable enough with her own talent to present her audience with both some lost gems and a few new compositions she has discovered." She chose these classic standards because, as she says, "I am in the business of memories, evoking memories for my audience who have experienced these songs in their lives and creating memories for those who are discovering the songs for the first time." She goes on, "I speak about the songs, their composers, the original artists and then maybe the audience will not just enjoy my interpretation, but will seek out the original artists and rekindle their relationships with them thereby keeping these great artists' work alive." She plans to do just that during a handful of tour dates she has coming up this summer and through the end of the year. All of the "Evenings with Lynnie Godfrey" are listed below with more to be announced shortly.

"An Evening with Lynnie Godfrey"